TEST FOR YOUR TINT BY PRESSING THE COLOURED GLASSES ABOVE

Visual Stress also known as Meares-Irlen Syndrome and sometimes Irlen Syndrome, is a type of light and glare sensitivity which affects around 40-50% of Dyslexics. A significant portion of Autistics and causes words to move around on the page. The sentences when alternating with the white spacing mimic a striped pattern. At certain spatial frequencies, this makes the brain very sensitive resulting in visual disturbances which make reading extremely stressful.

There are lots of other symptoms; blurred vision, tired eyes, headaches, swirly patterns on the page, letter reversals, colours and shapes. It’s therefore a visual and perceptual disturbance, although we don’t want to get into a debate here on the difference between Vision and Perception. 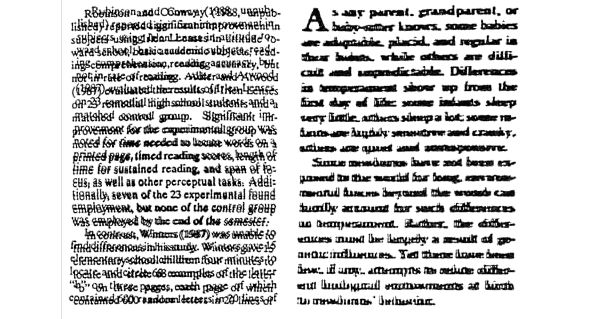 If someone has difficulty with reading whereby there is a visual disturbance as described above, then they have Visual Stress or Meares-Irlen.

Whatever the symptoms are, the consequence of this is a slower reading speed and lower literacy attainment. There are so many cases where this undetected condition has led to a lifetimes worth of heartache and feeling of helplessness.

In fact it’s not even linked necessarily to Dyslexia and many sufferers who have it are not Dyslexic. Read123 studies suggest this incidence in the general population is around 1 in 3 which means schools CANNOT and SHOULD NOT ignore it if they feel a pupil or student is not reading as well as they should.

What causes Visual Stress? The most popular theory for Visual Stress could be the Visual Cortex Hyperexcitability Theory. The words on the sentence alternate with the white spacing in between lines to create striped patterns. Therefore, at certain frequencies or size of striped patterns, this triggers off a visual disturbance in some people. This then gives rise to the symptoms experienced by Dyslexics and Visual Stress sufferers.

There is still a lot of research going on in this field, but this is the most popular theory.

There is also The Magnocellular Theory whereby the M-Cells in the visual pathway which are responsible for detecting striped patterns are not functioning as fast as they should. Please note how we mentioned above the sentences on a page creating a striped pattern. Researchers of this theory have found Blue and Yellow tinted glasses to work.

We feel there is some basis in this theory as Optometrists, but this doesn’t explain why Visual Stress sufferers need other coloured lenses and overlays e.g. Mint Green and Pink.

Read123’s Optometrists treat Visual Stress with specially tinted glasses. Also known as Visual Dyslexia or sometimes as Meares-Irlen Syndrome it is commonly associated with Dyslexia, Migraine and Autism.Visual Stress is managed with colour therapy using coloured overlays and tinted lenses. Tinted lenses can be non prescription or prescription. The colour in the overlay or lenses helps manage the symptoms. Read123 use 17 specialised tint colours in their Visual Stress glasses; Mint Green, Sky Blue, Double Blue, Pink-Magenta, Lime Green, Peach-Orange, Leaf Green, Amber-Orange, Rose, Strawberry Red, Grey, Purple, Yellow, Aqua-Turquoise Blue, Purple-Rose, Lilac-Rose, Double Purple. The choice of colour is purely individual and there is no way to predict which colour will work for any one person. The tint colour required in the Visual Stress glasses may even be a customised bespoke tint which Read123 can produce for our clients at an affordable price. More information on Dyslexia overlays and glasses here..

Dyslexics and people who suffer from Visual Stress can be tested by qualified professionals like Optometrists or other professionals who understand the testing procedure. We don’t recommend people test themselves with random colours on a computer screen or via unqualified people who make exaggerated claims with no basis on proven fact.

Once tested and an appropriate colour has been chosen, this reduces the symptoms of Visual Stress resulting in an INSTANT improved reading speed. We have found an improvement of 70% in some cases which is extraordinary.

Visual Stress sufferers should be tested every 6-12 months as the colour of the overlay and tinted lenses can change.